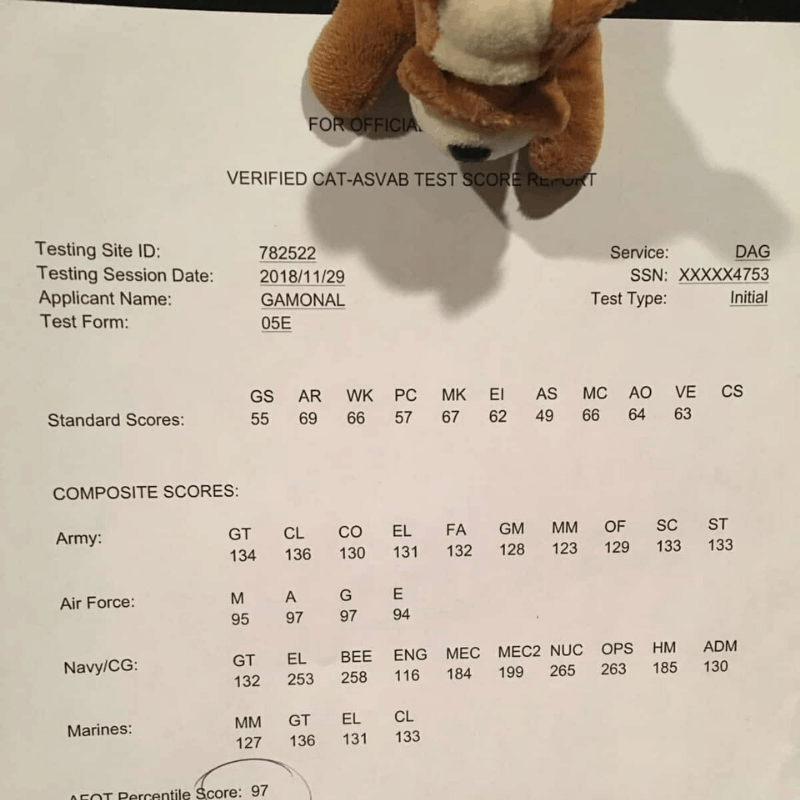 I’ve helped several people (including myself!)  get better scores than expected!

Yesterday I took the ASVAB, I’m considering joining the National Guard, or some other military branch. We’ve had a few students in the past who needed help studying for the ASVAB test so when I went to take it I personally had a good deal of confidence. This did not stop me from both bookmarking the practice test page nor hitting the library for a solid ASVAB study guide.

(I recommend anyone with an interest in serving in the United States Armed Forces do the same!)

When the big day came to took the test I was a bit nervous and got to the testing location early. When I arrived there was a young man named David getting in at the same time. Since we had time to kill, and since I’m an ASVAB Tutor Las Vegas,  I asked him if he’d like to study in preparation. David waved me off, “I’ve got two degrees, and I’m not worried.” I studied for the half hour then my recruiter arrived and signed me in for the test. When the proctor asked me why I was choosing national guard I let her know that I just wanted to get my feet wet and see which branch might work best in the future. David pipes up, “Go big or go home bro, I’m doing Airforce Para-rescue.” Finally, we began the 3 hour test David left before I did but I heard the proctor tell him he got a 91 (pretty solid score). When I went up to receive my score 20 minutes later I scored a 97.

Naturally, I dished her out some Gamonal Tutors business cards.  Did I mention I provide ASVAB help?

David’s a good dude, even offered me gum before the test. But, I’d like to note, there are many types of people out there, and some may be better suited for tutoring than others. Although I had confidence in my ability I recognized the value of willing to learn. I have a similar approach when preparing others for tests. I recognize that everyone has sticking points and should enter every situation (particularly testing situations) feeling confident in their abilities, but confidence is no replacement for good old fashion practice.

Of course there is more to the ASVAB than math – people also struggle with word knowledge, general science and other topics, especially if it’s been awhile since high school, or you weren’t paying much attention at that time (hey, it happens!)  – but the folks I talk to are most concerned with the math.

Much love Ya’ll and remember,

Math is the Future!